"In the grand scheme of Los Angeles, it's not a huge house. But it feels right. We use every single square foot." 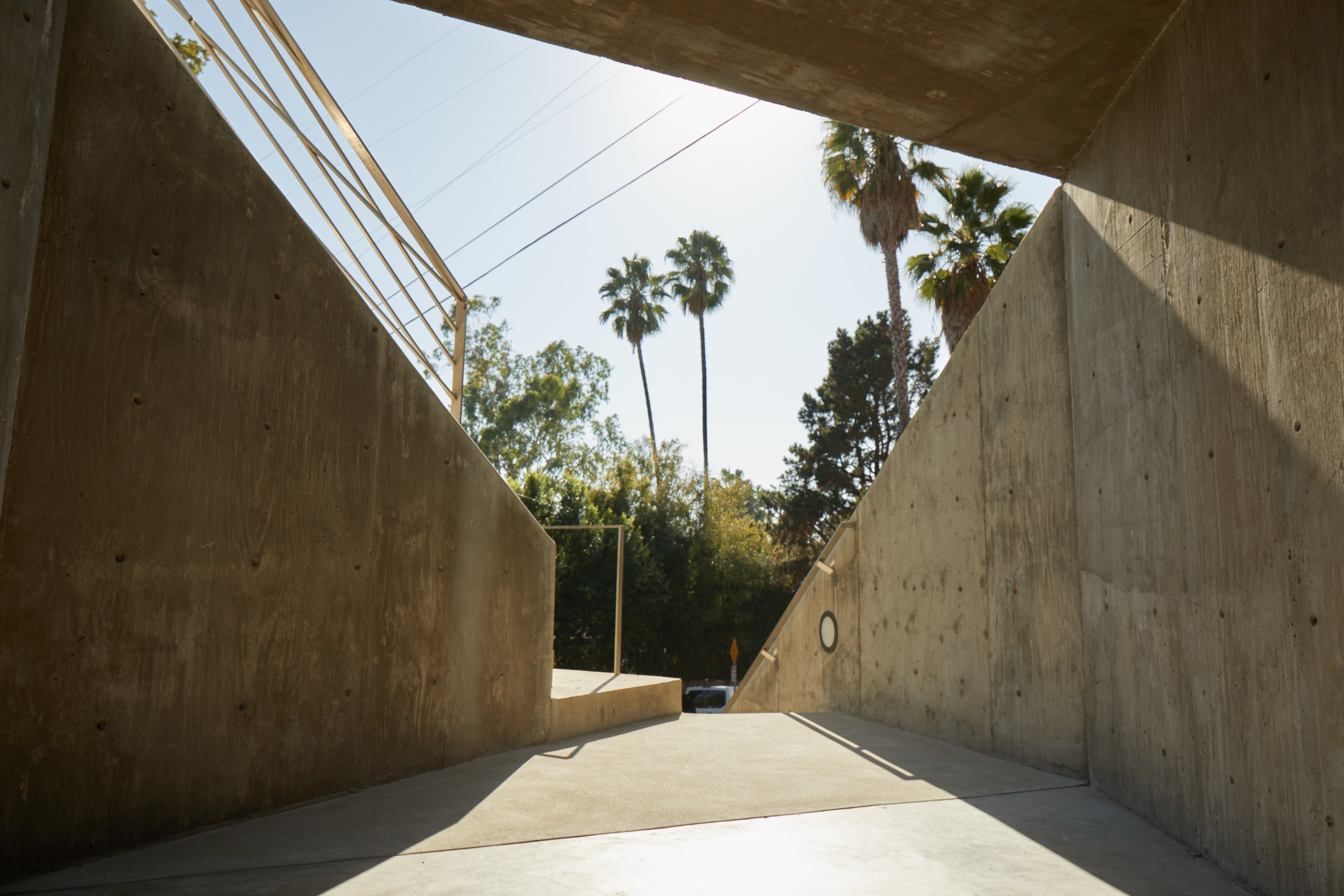 The most ingenious of California’s legendary modernists (R.M. Schindler, John Lautner) embraced miniscule budgets and difficult sites to design charming, innovative homes for real people to live in. Now, in an age when architecture seems to have become a luxury product for clients with more money than sense, that spirit can be hard to locate in Los Angeles. But the House with Five Corners by Escher GuneWardena (2009-12) has it in spades. We recently sat down with architects Frank Escher and Ravi GuneWardena and homeowners Wayne and Karl to discuss the challenges they overcame to bring their vision to life — and how the final design has exceeded everyone’s expectations. 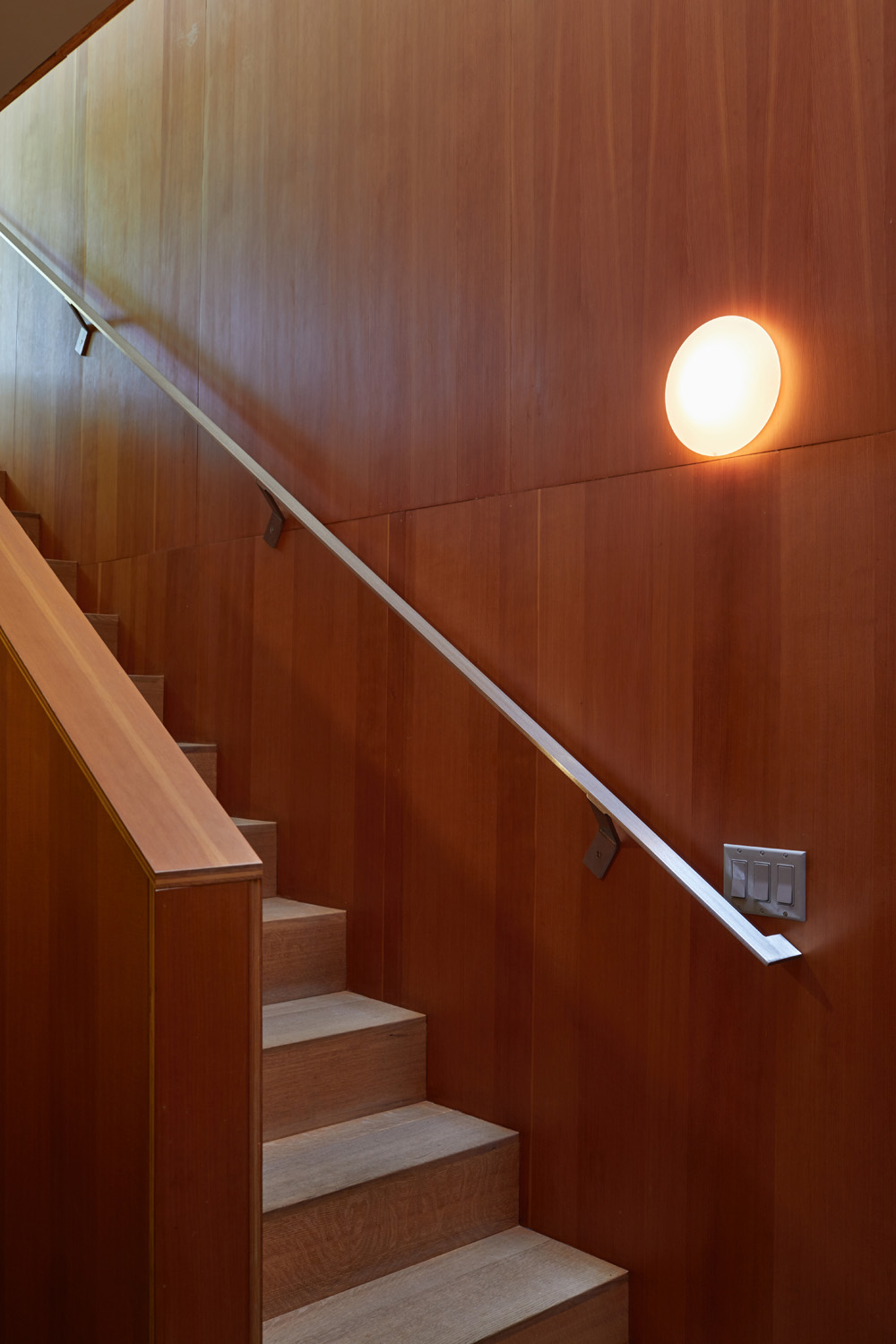 How did this project start?

Wayne: It started with the site. It was Thanksgiving 2008. I was at my brother's house in San Diego. I’m always looking at real estate, and I just happened to find this lot. I thought, ‘That's kind of where we want to live.’ So I turned to Karl and said, "Hey, do you want to build a house?" And he said, "No.”

Karl: I was very skeptical.

Karl: I was like, ‘This is crazy. This isn't going to work. This is beyond our means.’

The site itself was just a steep dirt hill, right?

Wayne: With a giant abandoned city water tank on it.

Karl: It was huge — 60 feet in diameter. And you could walk on top of it. After climbing a rope up the hill.

Wayne: It looked like it had some nice views, but that was about it. 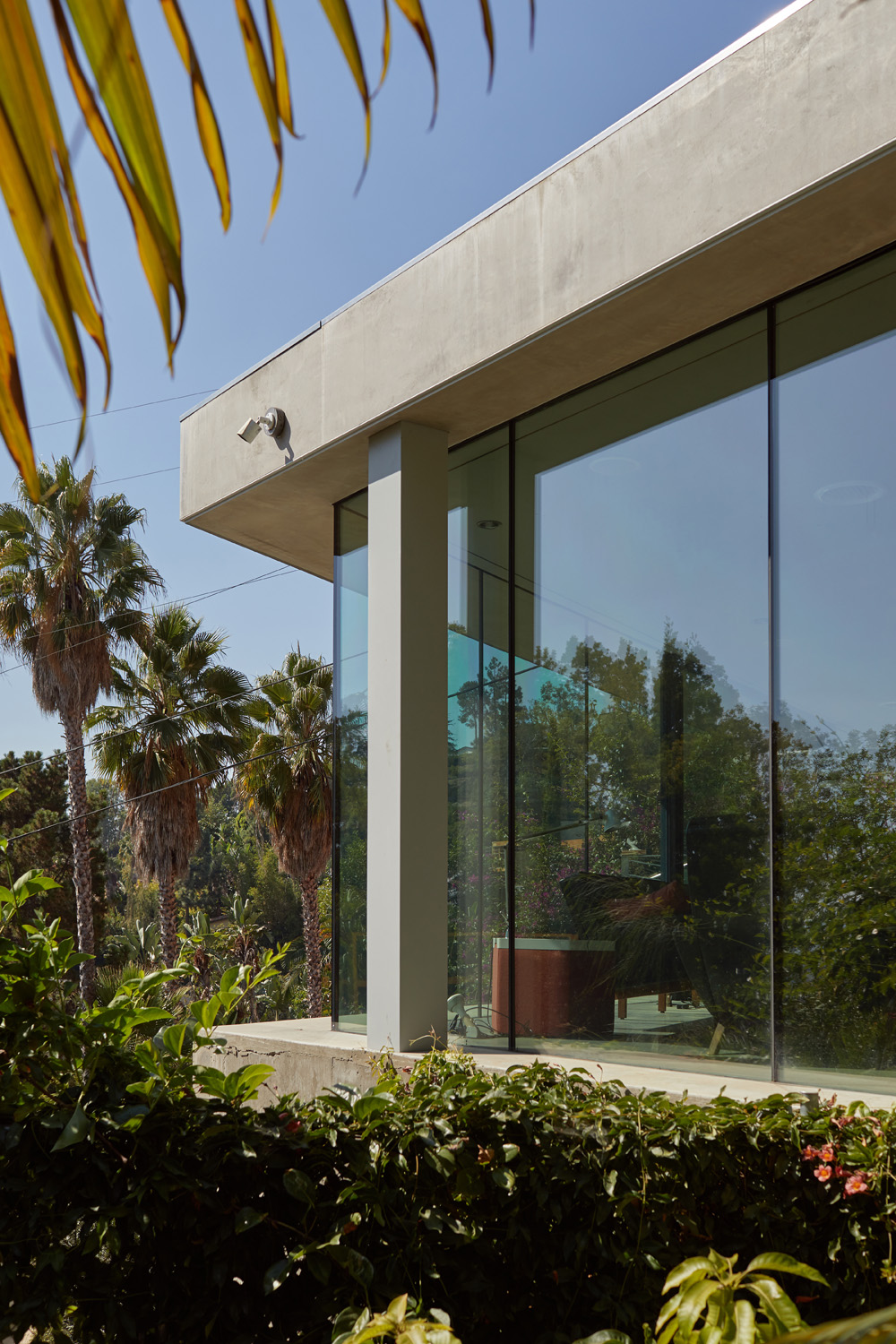 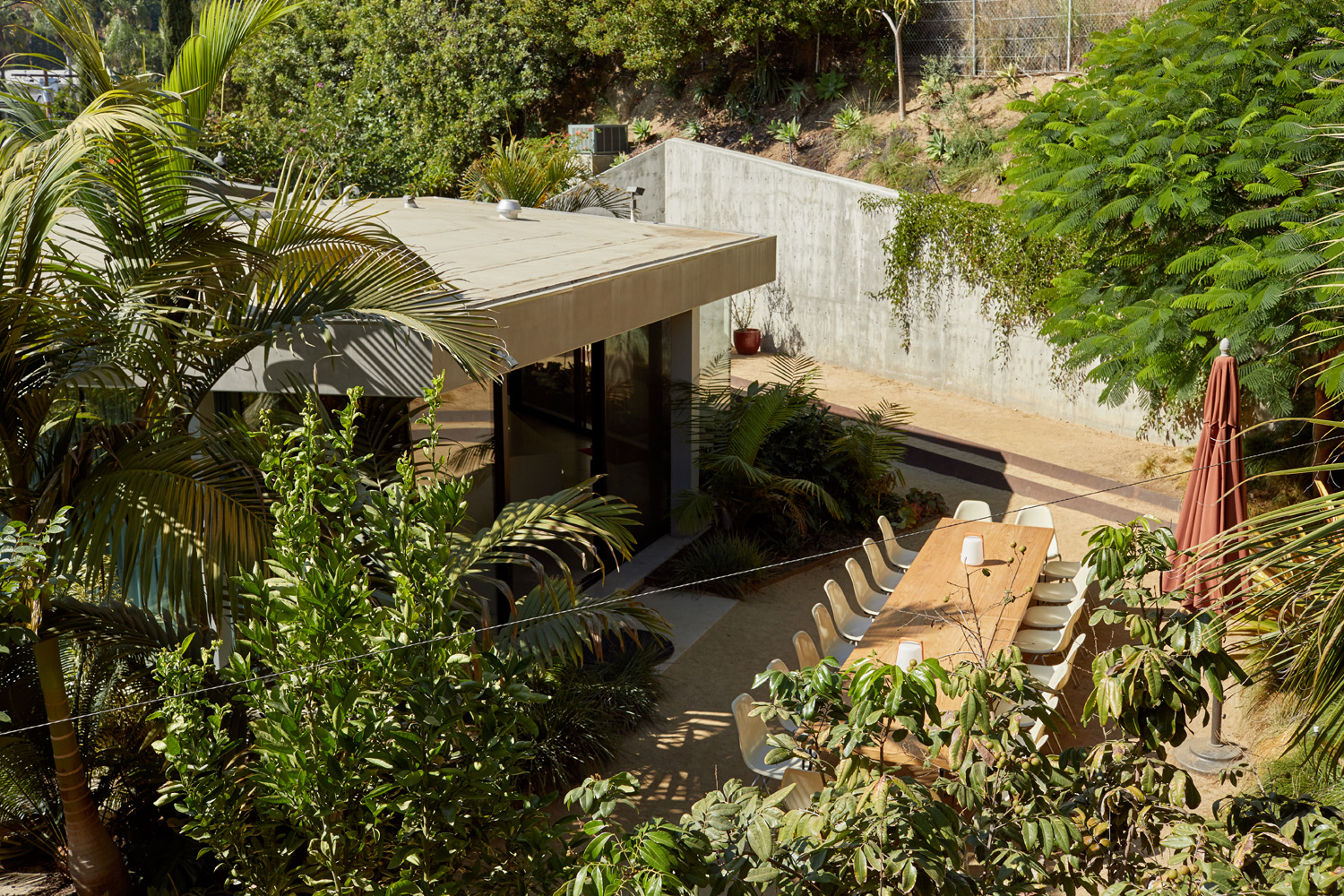 Had you ever considered building your own house before?

Wayne: I think it was always a dream we shared. We just never talked about it.

Karl: We’ve always loved design and architecture. We would tour Schindlers, and Frank Lloyd Wright homes, and so many other modernist homes here. I'm a bit of a maker — an engineer by training. But I was still skeptical.

So what did it take to convince you?

Wayne: I did my stupid calculation and said, “Look! We can buy a piece of land and build the house we want and it will be really cheap!” Which turned out to be totally wrong. [Laughs] But finally Karl said, "OK.”

Karl: I made him promise. “This is not a project. This isn't something we are going to build to resell. We are building this for us and our family. That’s it.” And so we buy the property and suddenly it was like, “OK, I guess we needed to draw in a house. I guess we need an architect.” 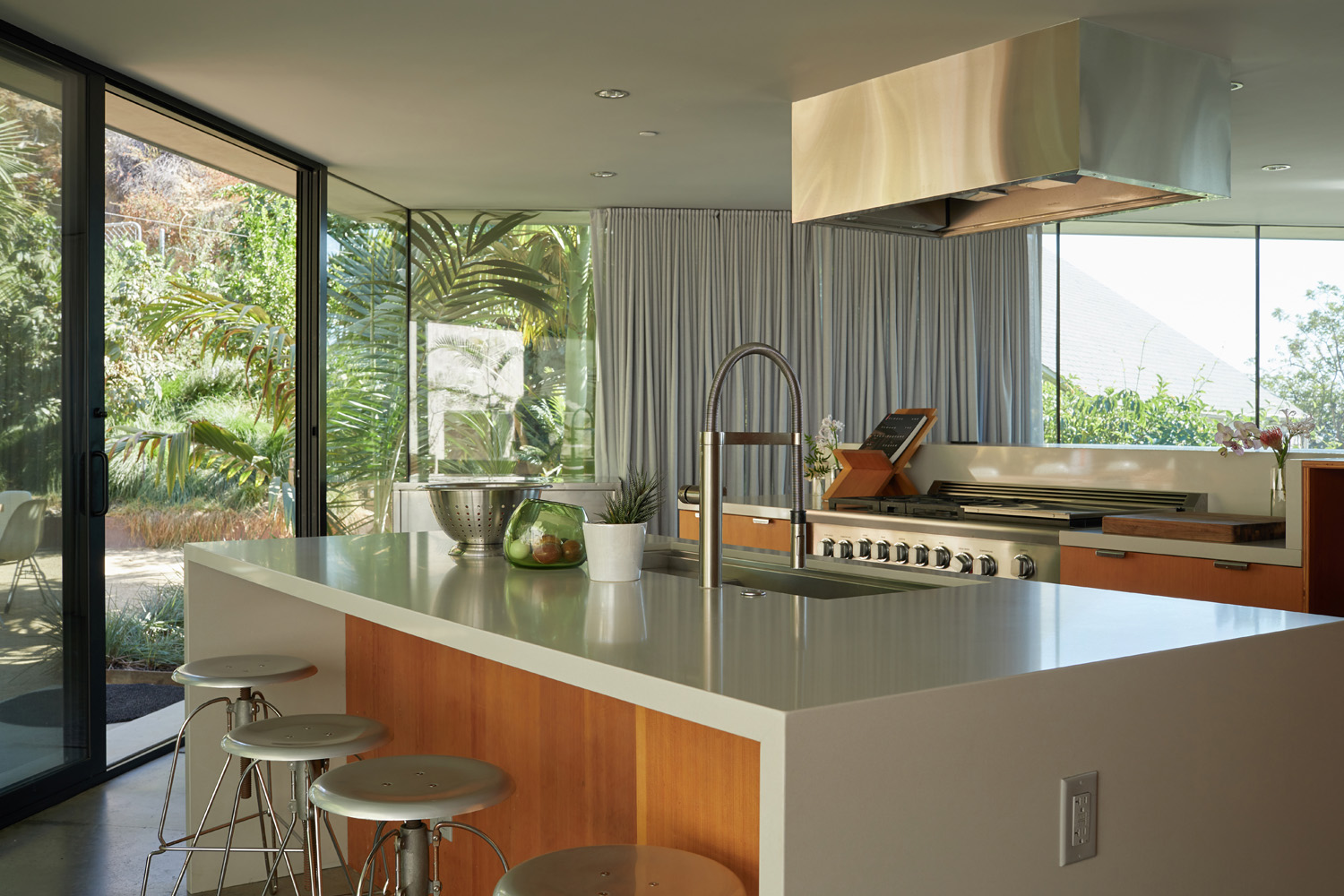 How did you find Frank and Ravi?

Karl: I started Googling architects I like — famous midcentury guys like John Lautner. And I saw that there was a Lautner exhibit at the Hammer Museum curated and designed by these two business partners, Frank Escher and Ravi GuneWardena. So we went and saw the exhibit — and Wayne being Wayne, he had an appointment with Frank and Ravi within a week.

Wayne: We didn’t interview any other architects.

Ravi: It was the first time clients came to us and said right off the bat that they wanted a raw concrete house. Concrete and wood — real materials.

Frank: Our reaction was like, "Can this be real?" It just seemed too good to be true. We kept expecting them to say they also wanted gargoyles or something. [Laughs]

You didn't need to get on the same page philosophically. You could proceed directly to the design.

Karl: Right. Then they came to the site and climbed the rope; at the top, it was all nasty garbage and beer cans, because this is where the local kids used to hang out. And Frank smiled. He seemed excited.

Frank: It looked like a really challenging piece of land. But those are the most interesting ones. 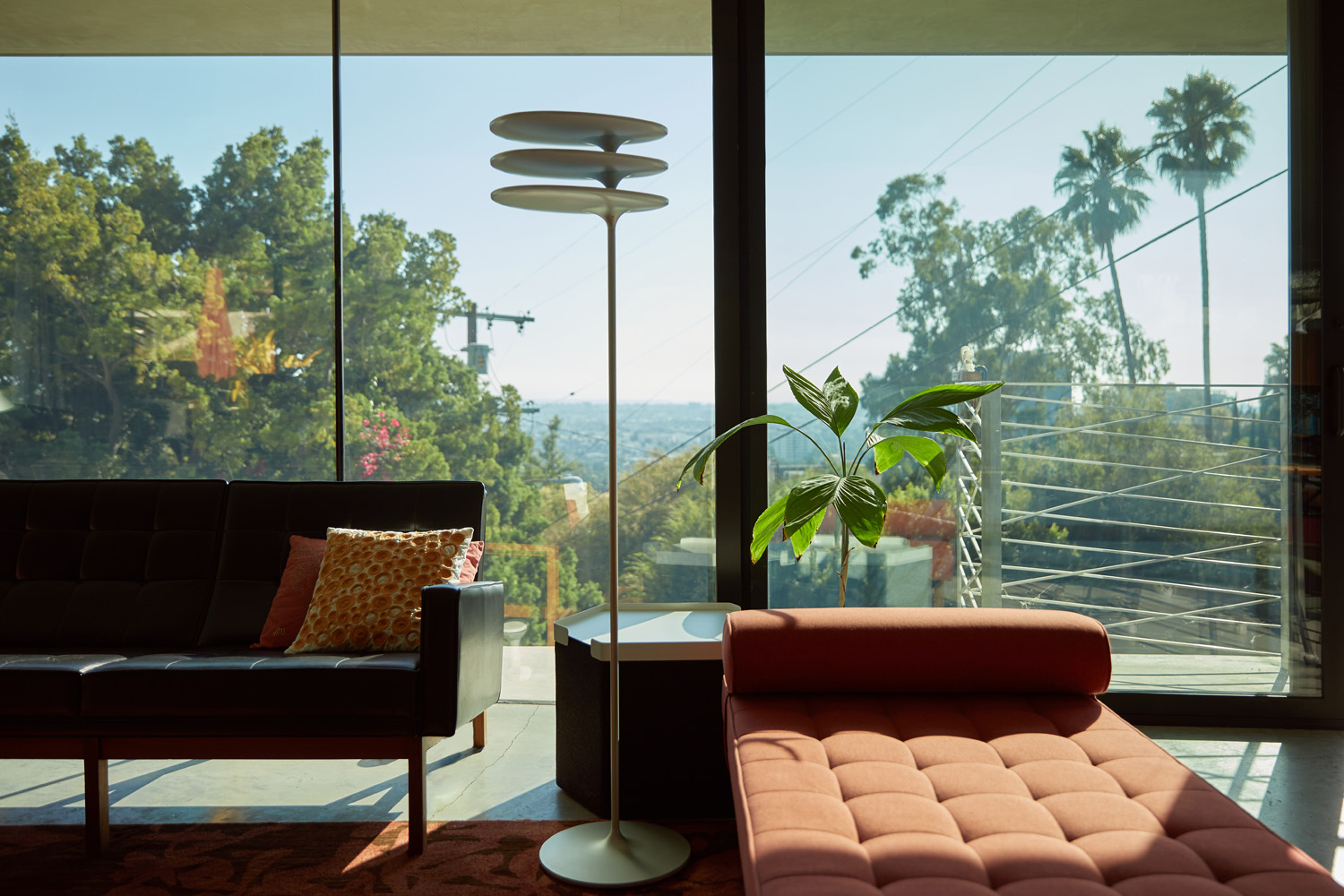 So how did the design process start?

Frank: We initially developed three or four different schemes. We knew from the beginning that we would put the living and dining areas at the top, with a level outdoor area all around it. Our idea was to turn the house upside down, with the bedrooms on the lower floor.

Ravi: But the early shapes were more square —

Frank: — and what really drove the design were the restrictions of the site itself.

Ravi: The various setbacks. Some we knew about, but then there were months of discussions with the Department of Water and Power. We learned we had to stay a certain distance away from the power line and the sewer line and the rear slope and so forth. And that started shaping the house. Every week there was a new discovery —

Ravi: — and a solution, hopefully, at the end of it.

Frank: Once we looked at all of these setbacks, we ended up with a very odd shape: a pentagon. And so we decided to embrace it; ultimately, there was only one wall we actually could determine or “design.” The others run parallel to the setbacks. And we all just looked at the shape and thought, “Wow, we really like that.”

What was it about the pentagon that you responded to?

Wayne: Just the geometry of it. It was beautiful. Of course, then I had to go and ask to shrink the house by 1,000 square feet because of our budget. [Laughs]

Did you ever worry that there were too many restrictions, whether budgetary or regulatory? Did you worry that you weren’t going to be able to make the house work?

Frank: No. But we really had to fight for every inch — the entrance, the staircase, the driveway, the bedrooms — so it was a three-dimensional process.

Ravi: We're not afraid of complications. The problem is that we don't want it to turn into a complicated piece of architecture.

And that could have happened quite easily here.

Ravi: Yes. There are a lot of architects who thrive on making it complicated. Our approach is always to calm everything down as much as possible. When you're dealing with, like, 37 different parameters, it becomes very difficult. And I think the fact that the house turned out the way it did is a testament to what we do.

What were some other key decisions that made the house click?

Frank: The realization that we should make the house shell of concrete, and then make everything inside of wood. Then at some point we decided that all the wooden elements inside the house should be rectilinear and perpendicular, unlike the outer shape.

Ravi: Overlaying that orthogonal grid on the pentagon created such an interesting shapes all around the perimeter.

At some point we decided that all the wooden elements inside the house should be rectilinear and perpendicular, unlike the outer shape. 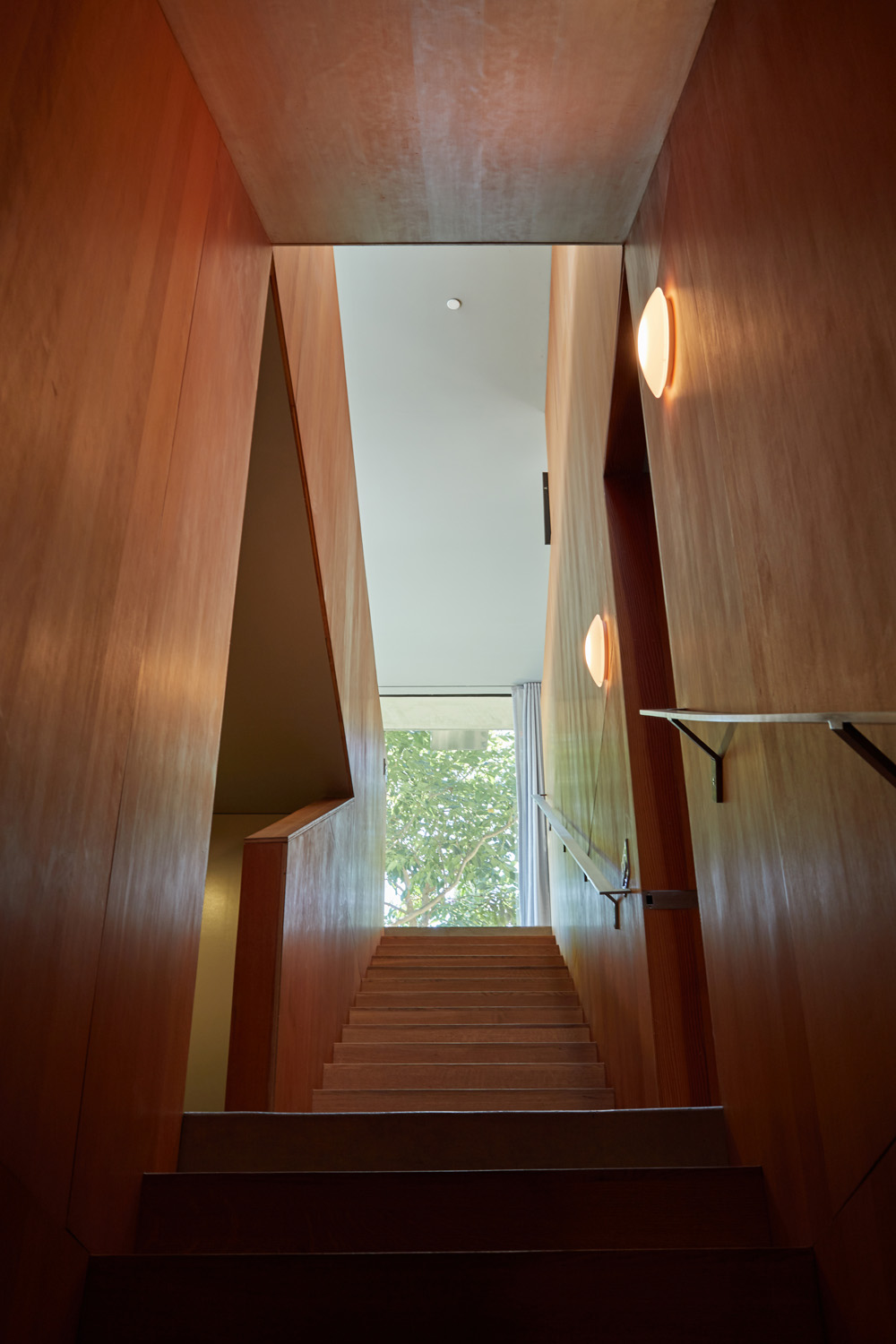 Karl and Wayne, your family was growing at the time. You adopted your son during while the house was being built, right?

Karl: Yeah. We have pictures of Daniel on the backhoe. It was terrific.

It must have been exciting to see the house rising up — to say, “That’s going to be our son’s bedroom.” Was there a moment when it started to feel like home to you?

Karl: We had our first Christmas here. There was nothing in the house except our little Charlie Brown tree, and our dogs, and Daniel.

Ravi: What year was that?

Karl: We had a temporary water heater. We were going to the laundromat to do our laundry.

Wayne: Yeah, it was rough. [Laughs] 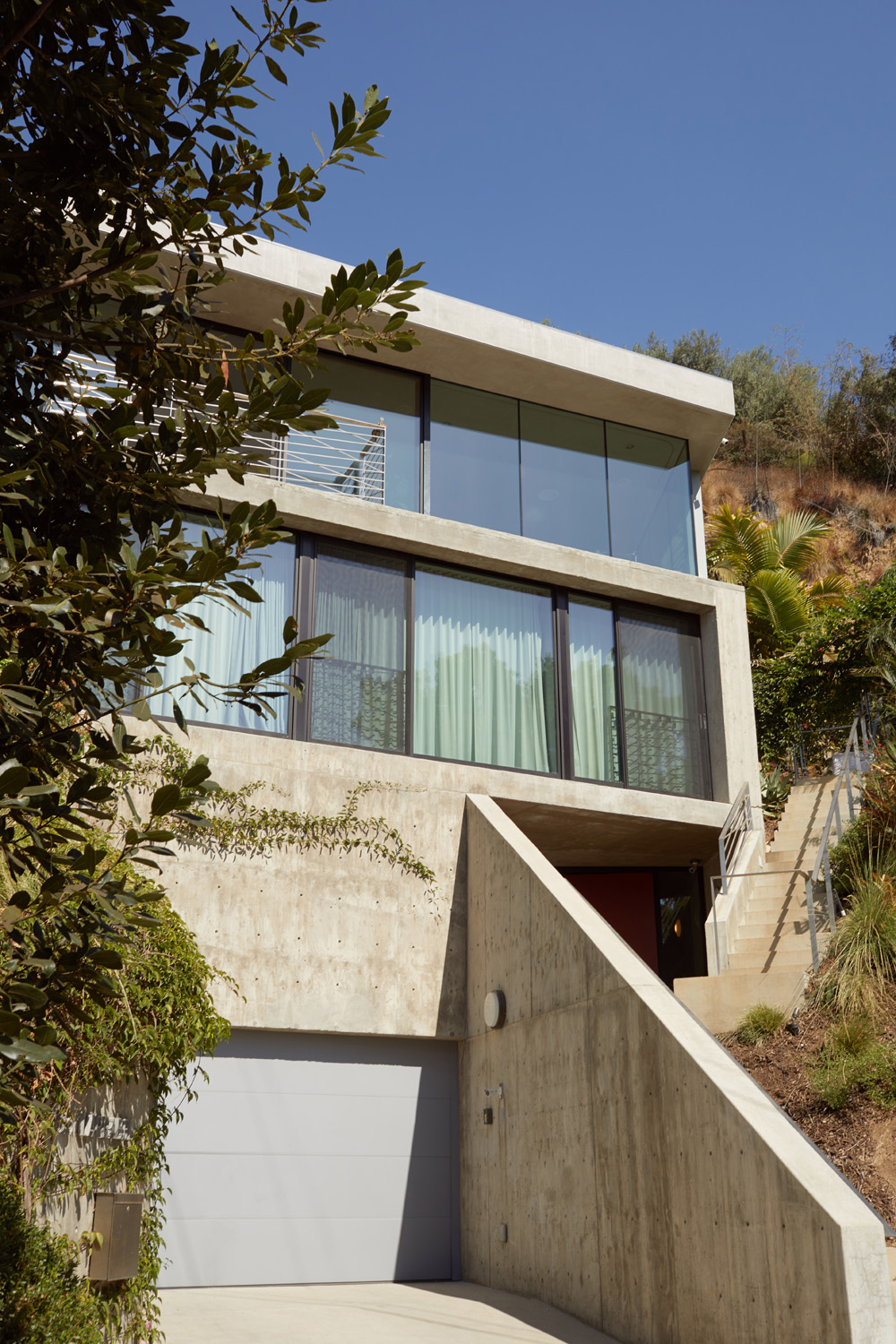 Did the house turn out how you envisioned it?

Wayne: It’s better than I expected. When we travel, we always want to go home. However well-designed a hotel is, it's not like this.

It was made for you.

Wayne: It was. And I think we got more than we bargained for. I mean, the inspector couldn’t believe how much we paid for it. His assessment was way too high at first, and I actually had to provide receipts and loan documents so he would lower it.

I mean, in the grand scheme of Los Angeles, it's not a huge house. But it feels right. We use every single square foot.

How about the architects? What does this house mean to you?

Ravi: I think it’s one of our best. Even though it was complicated, everyone was pushing and pulling in the same direction. I love coming back here.

Frank: We have done houses on bigger budgets, or of a bigger scale. But our favorite houses are the ones on smaller footprints with clients who are really involved. It's different than just writing a check and saying, “See you later."

Frank: They do. And still to this day I walk into this house and see these elements and spaces — the long staircase, for instance, with the light coming down from above — and I think, "This turned out really well without being complicated, without being fussy." This is a house that will hold up.