During our global isolation it’s tempting to feel our spaces are too limiting, but perhaps we can learn something from a location where isolation feels extravagant rather than oppressive. William Hall found solace at a secret location in the desert.

Story and photography by William Hall 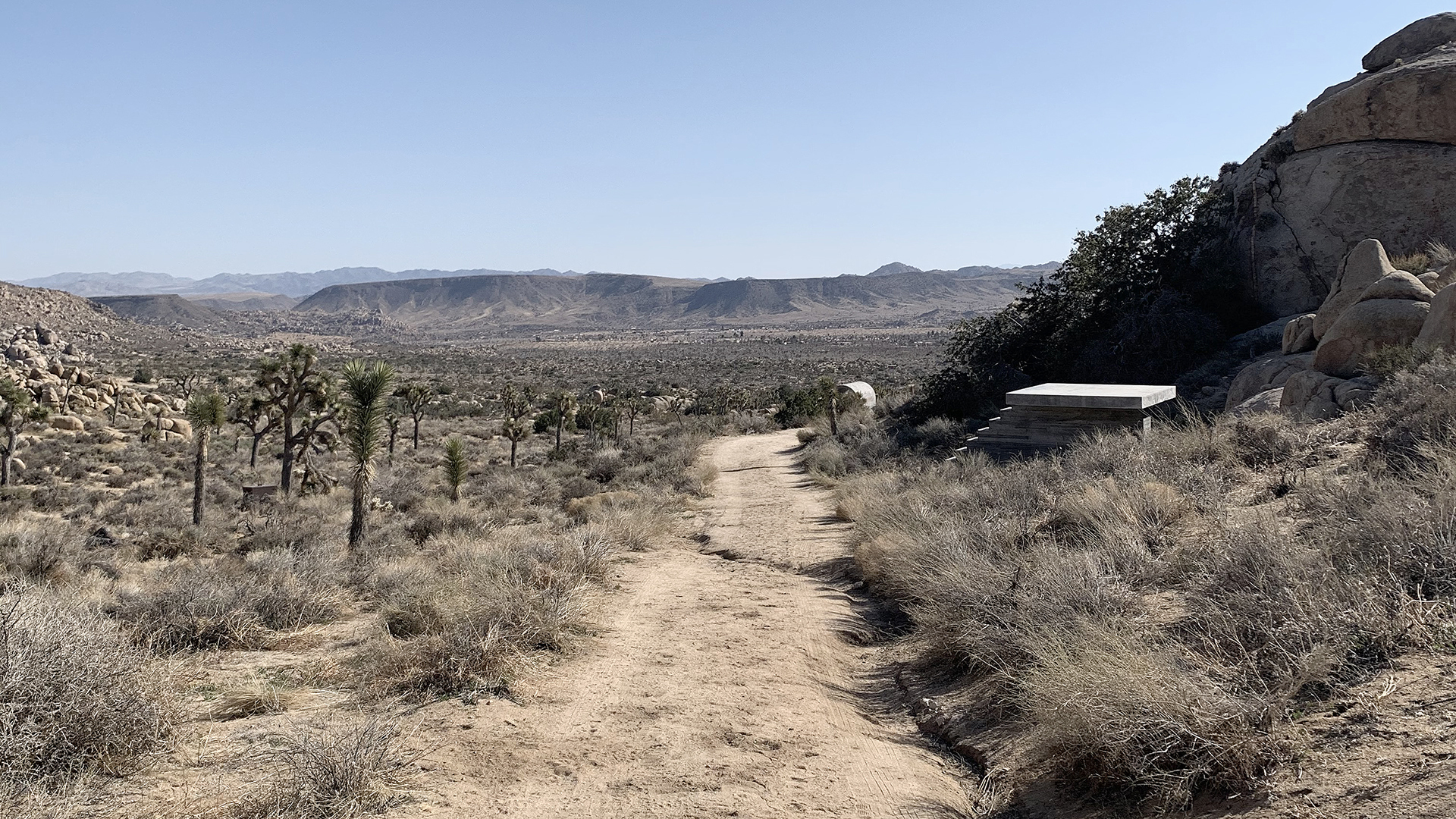 ‘Obscured Horizon’, like many destinations in the Californian desert, cannot be found with a simple address. You need those special instructions that are specific to the region. They say: ‘turn right at the second pile of tires’, or ‘fork left at the bent dead end sign’. They’re bound up in the discarded readymades – the desiccated iconography – of the desert. 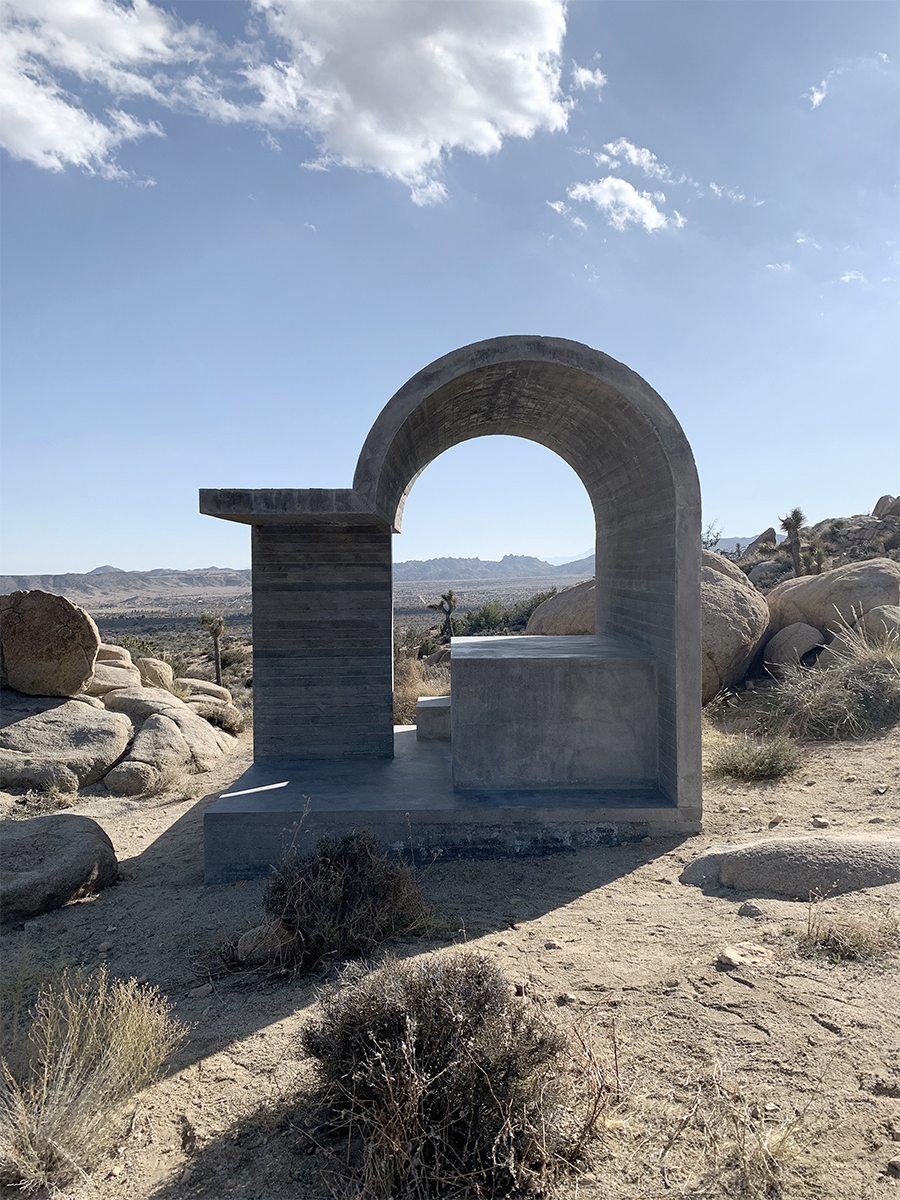 I drive thirty minutes from the nearest small community, half on a sparsely populated highway and half on increasingly jarring dust roads. At a locked gate I collect my water and continue for a mile on foot, softly crunching up and down a private track that snakes around Joshua trees and scrub. I know I’ve arrived when I’m within sight of the owners’ cabin on land bought from the artist Ed Ruscha in 1993. It’s at the edge of a vast valley with a view to distant mountains. It’s a calming and beautiful landscape, but unforgiving, and the muted violence of the desert is palpable: Even in winter the sun beats unremittingly in the Mojave Desert. In summer it has been measured at over 130F.

The heat, isolation and stillness are seductive – but the apparent inaction is deceptive. Stand for a few moments and you begin to discern covert life. Jack rabbits lean and scramble in the distance and lizards rustle unseen in the undergrowth. Small birds chase insects. An old windmill creaks lazily. 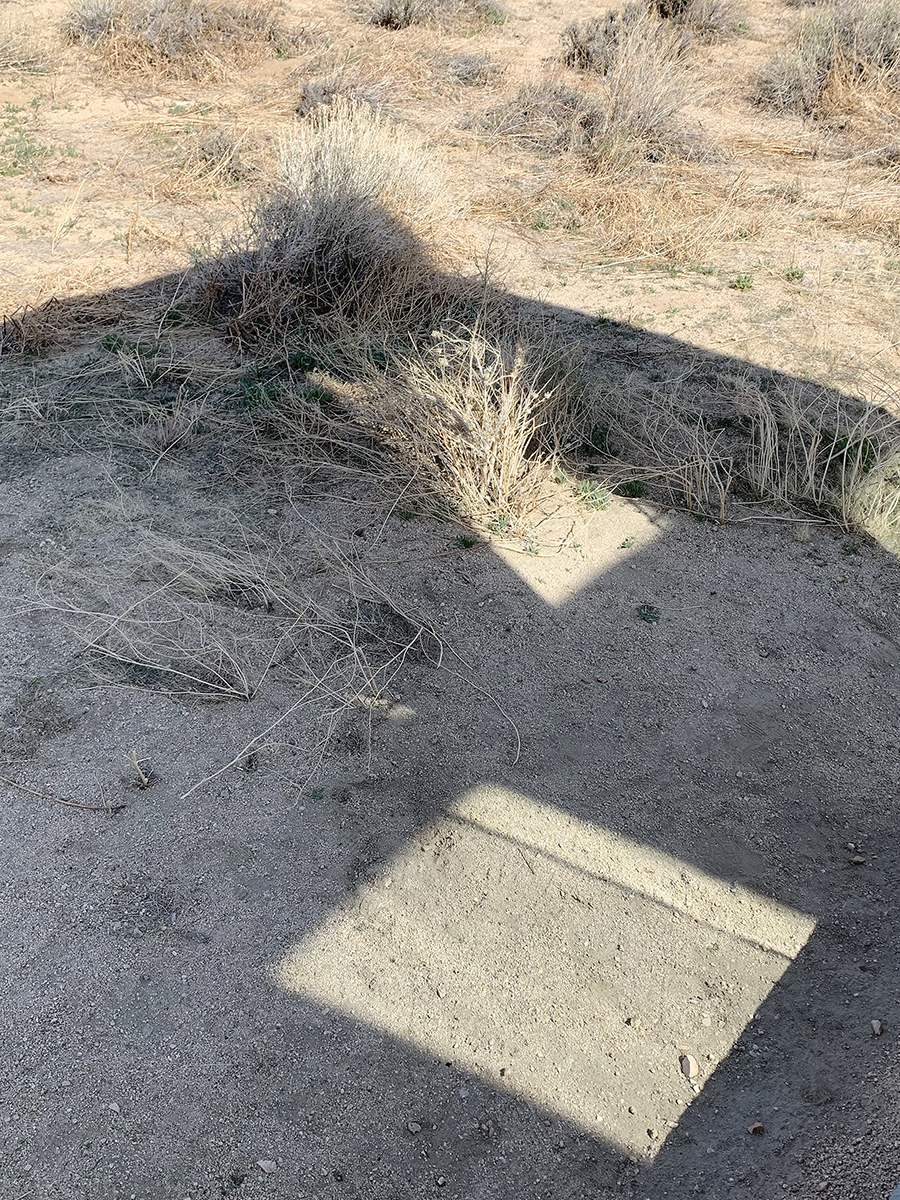 Obscured Horizon is a 2011 site-specific work – actually three works – by architect Arata Isozaki. It seems grandiose to call them architecture. Really they are little more than gestures or fragments, like the raised foundations or empty swimming pools of incomplete projects. These are embryonic buildings: a stairway, a plinth, a shelf, a roof, but little more.

Arata Isozaki grew up in Oita, Japan, which was heavily firebombed in July 1945 when Isozaki was fourteen: ‘It was in complete ruins … so my first experience of architecture was the void of architecture’.  He studied under Kenzo Tange – the preeminent Japanese proponent of Modernist, Brutalist and Metabolist architecture – at the University of Tokyo and joined Tange’s office after graduating, beginning a career that has encompassed a series of movements, from those of his tutor, to Postmodernism and beyond.

Isozaki’s first building outside Japan was MOCA in Downtown LA, in 1986, a major public gallery that reinforced his arrival as an architect of significance. Since then he has worked all over the world on a series of major cultural projects. Each time mercurially dodging expectations and delivering buildings specific to site and client. Last year he was awarded architecture’s highest honour, the Pritzker Prize.

These are embryonic buildings: a stairway, a plinth, a shelf, a roof, but little more. 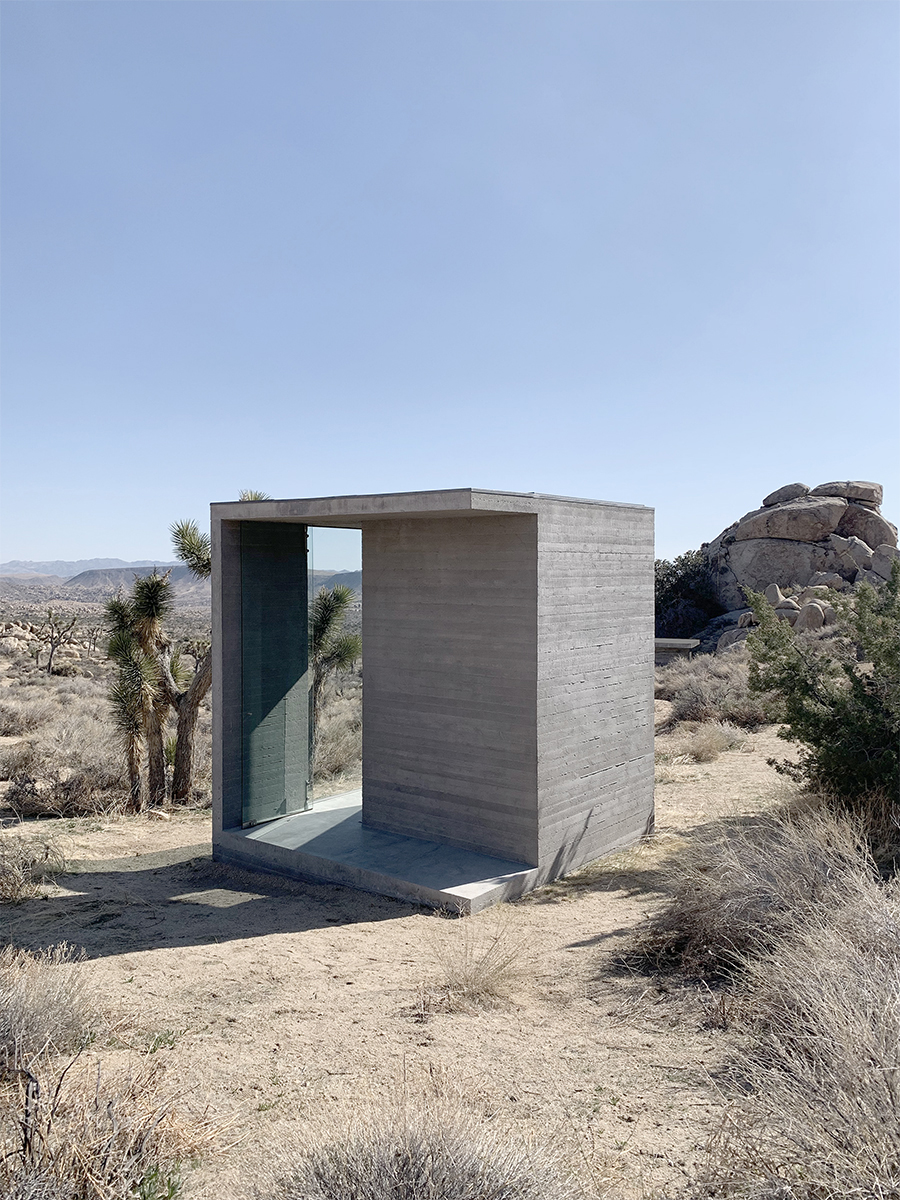 Jerry Sohn – a self-described ‘facilitator’ operating in the art and architecture world – met ‘Iso’ while the latter was working on MOCA. During construction of the gallery, Sohn asked him to design a house in Venice Beach and the pair became firm friends. On a few occasions Sohn invited him to the desert and on one such trip asked him to design an outdoor ‘bedroom’, to sleep outside through all the seasons.

Each of the works, Winter, Spring/Autumn, and Summer, provides minimal conditions for staying the night: Summer is just seven narrow steps leading to a plinth, elevated away from snakes; Spring/Autumn is somewhat exposed with a signature Isozaki barrel vault (seen in his earliest projects, and at MOCA) that precludes dew; Winter is an enclosed box with a glass door and partially glass roof. 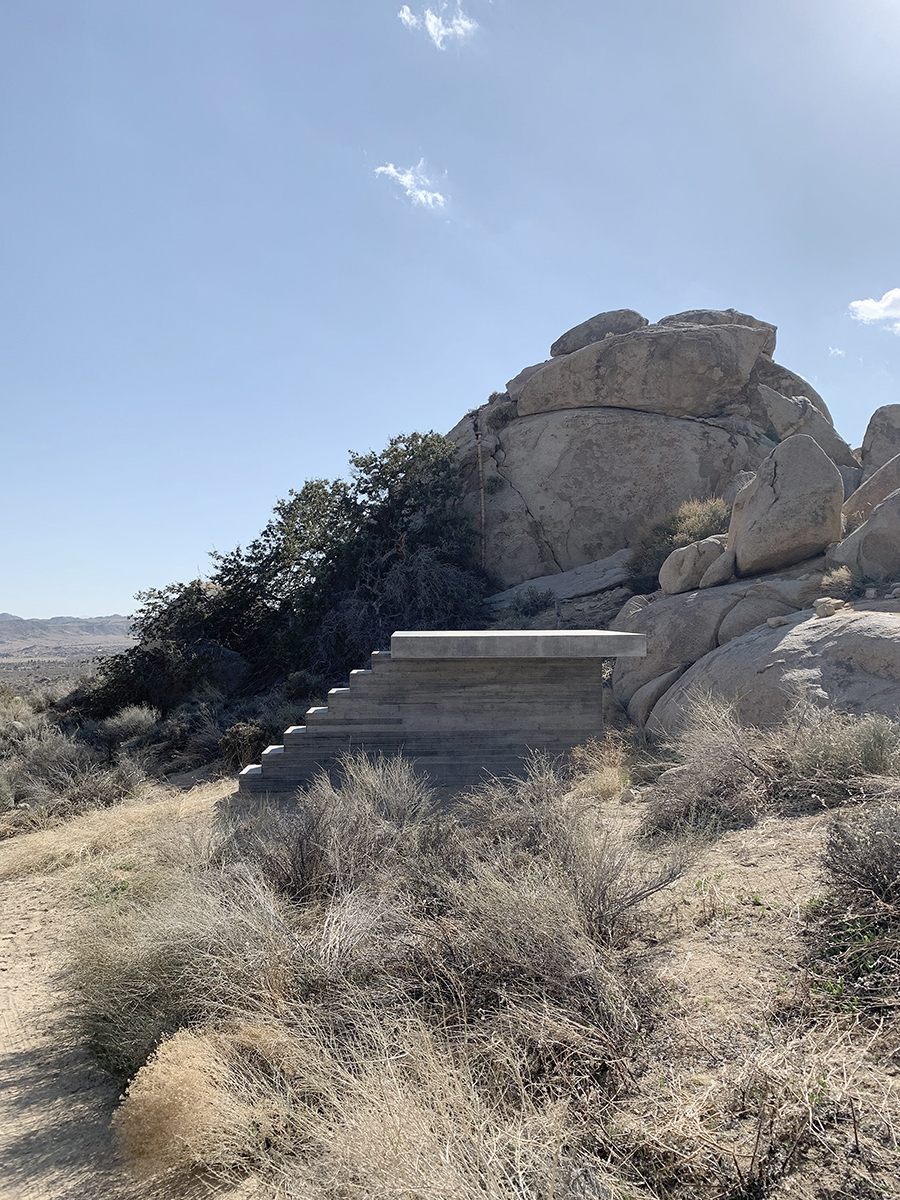 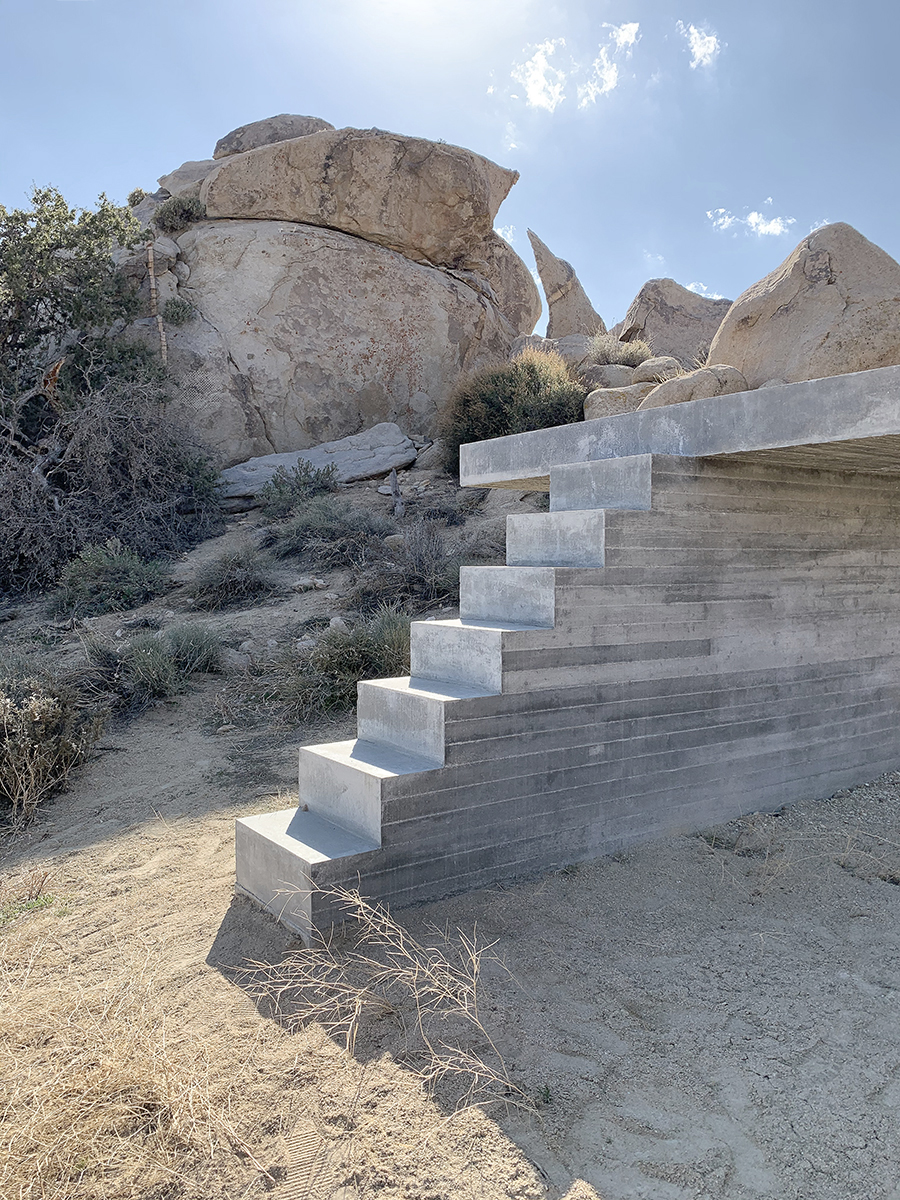 All have a related floor plan of 9x9ft square. All are constructed from board-marked in-situ reinforced concrete (meaning you can see the imprint of the 3” timber planks used to contain the poured concrete). They are of human scale and intent – in a wild place their raised, immaculate planes are civilizing. They are utilitarian, quasi-industrial, or in the words of Sohn, simply ‘useful’.

There is something ineffable about their unfinished quality – both of their surface and their form. There is potential in them, latency even. The anticipation of something still inchoate. Yet they feel entirely appropriate to their site; unpretentious, undemanding, raw, lasting.

Isozaki has cited an ancient essay ‘Hojoki’ (The Ten Square Foot Hut) as an inspiration for the works. In it, author Kamo no Chomei describes his experience of seeing fires and earthquakes destroy cities, and with ‘no obligations beyond myself … was free to go into monastic seclusion’. He fabricated the hojoki from metal and timber in such a way it could be moved on a whim. 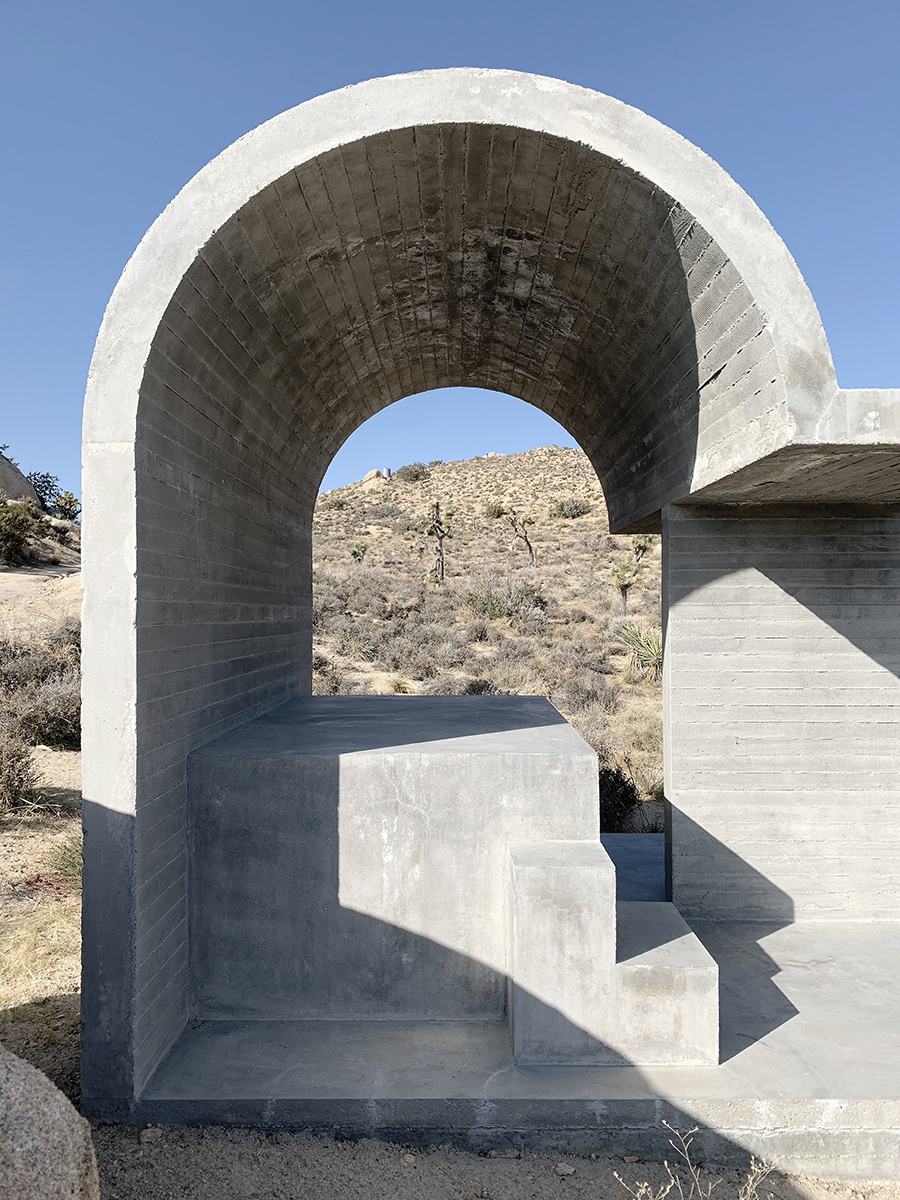 Isozaki has said: ‘Extravagance is, for me, complete silence. Nothingness. That is extravagant’.

Yet Isozaki’s structures aren’t really intended as homes – they’re satellites of Sohn’s cabin. They’re more like follies than living spaces. More like sculptures than homes. They encourage isolation and reflection.

Why would a celebrated architect choose to work on such a small scale, elemental project? Talking on the principle of the Japanese concept of ‘ma’ Isozaki has said: ‘Extravagance is, for me, complete silence. Nothingness. That is extravagant’. Isolation is a barrier to many things, but not to nothingness. Perhaps in our mandatory isolation – at least if you can find it – nothingness might be worth striving for.

William Hall is the author of Concrete (Phaidon)