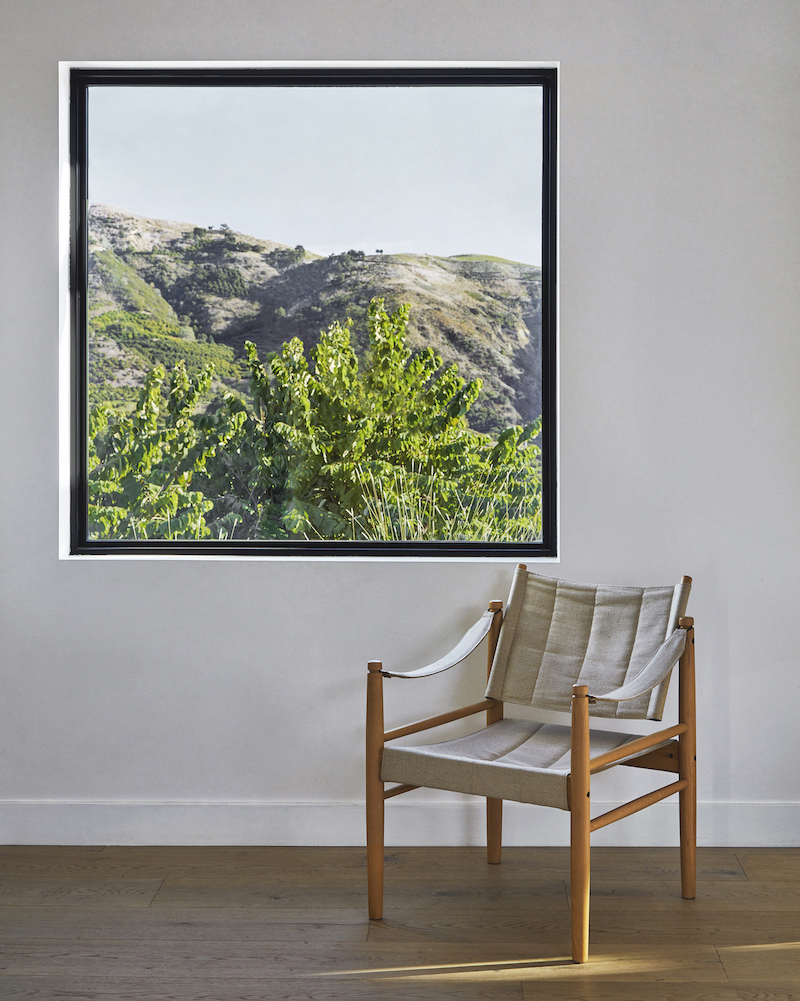 Afghan-born Mora Nabi and Southern California native Sean Boyd recently struck out on their own after working for established architects. Their first project, for a childhood friend of Sean’s, is an object lesson in clean-cut, inexpensive design that feels right at home in its rugged orchard setting

How did the project come into being?

Sean: My lifelong friend Brian texted me out of the blue and asked if we would be interested in designing a house for him. We text a lot, we're good friends, but usually it's like, "Hey, how are the waves today?", so this was a surprise.

Brian is dear friend, we went to school together, Carpinteria is a very small town, everyone knows everyone. Brian’s a fisherman; six months out of the year he's on a boat, he goes out to the Channel Islands and fishes for lobster September through March.

So that's where it started. Mora and I were still working full-time jobs at the time but we already had it in our heads to do our own thing, so it was a pretty easy answer to Brian’s question. 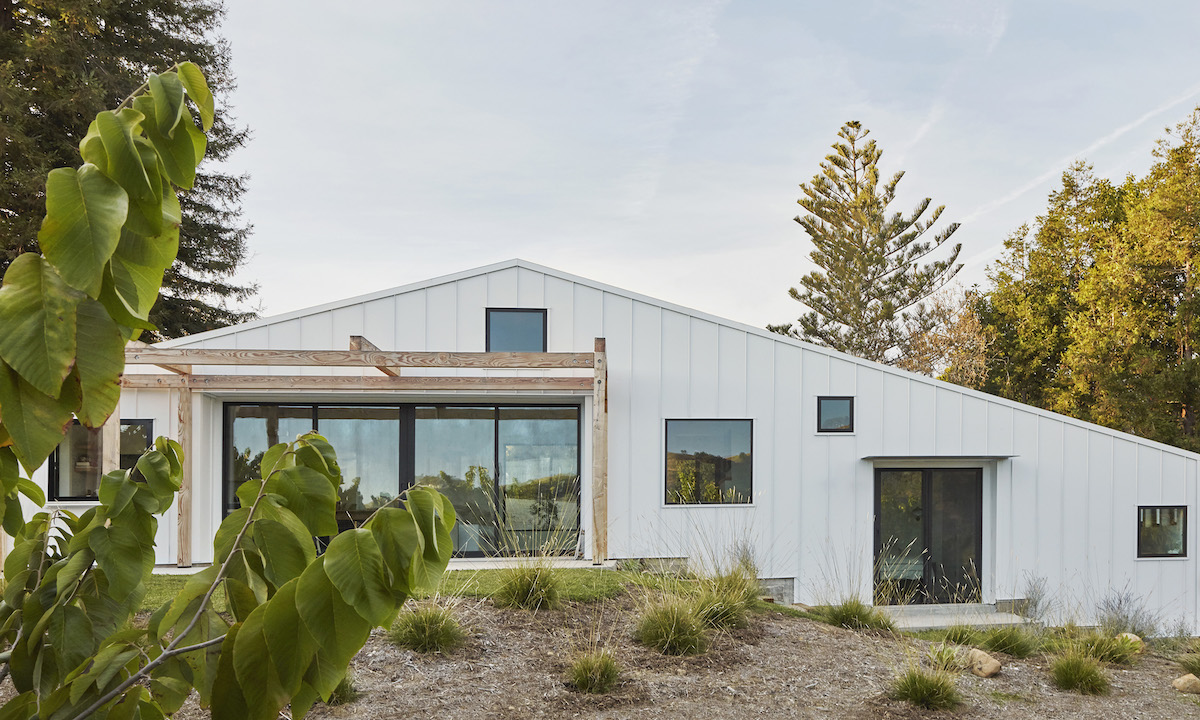 Did you have any control over where the building was located?

Mora: There are a lot of avocado orchards in that part of Carpinteria but some were switched over to cherimoyas in the '80s or '90s. This property is a cherimoya orchard on a pretty steep slope, when we started there wasn't even an address, that's how raw the site was.

In the beginning when you're looking at an acre of land you think you can do anything, put the house anywhere you want and it's a little daunting. But as you dig into the constraints of the site, it starts to narrow things down: the house quickly worked its way into one corner of the site.

We were interested in the fact that this was a working orchard and we wanted to keep the trees productive for as long as we could. When we first visited the site, we were standing amongst 20’ tall, dense trees and it was difficult to orient yourself let alone get an idea of what the view might be like. We found ourselves climbing trees, standing on ladders: it was a struggle to even see the site.

Sean: There is actually a small ocean view from the property but we weren't really interested in forcing that; we spoke to the clients about it because he's a fisherman, they're both surfers, the beach is two or three miles away from the property. We asked them: "Is it a priority for you to grab that little triangle of ocean view?" But, basically, they see enough of the ocean.

You’ve sited the house in a very private way, was that dififcult to achieve?

Sean: There are neighbors nearby, but we found that if we rotated the house slightly against the slope we could capture the best views. Now when you’re in the house it feels like there's no one around you: it was important for us to give the clients privacy and reinforce the feeling of natural landscape surrounding the house. 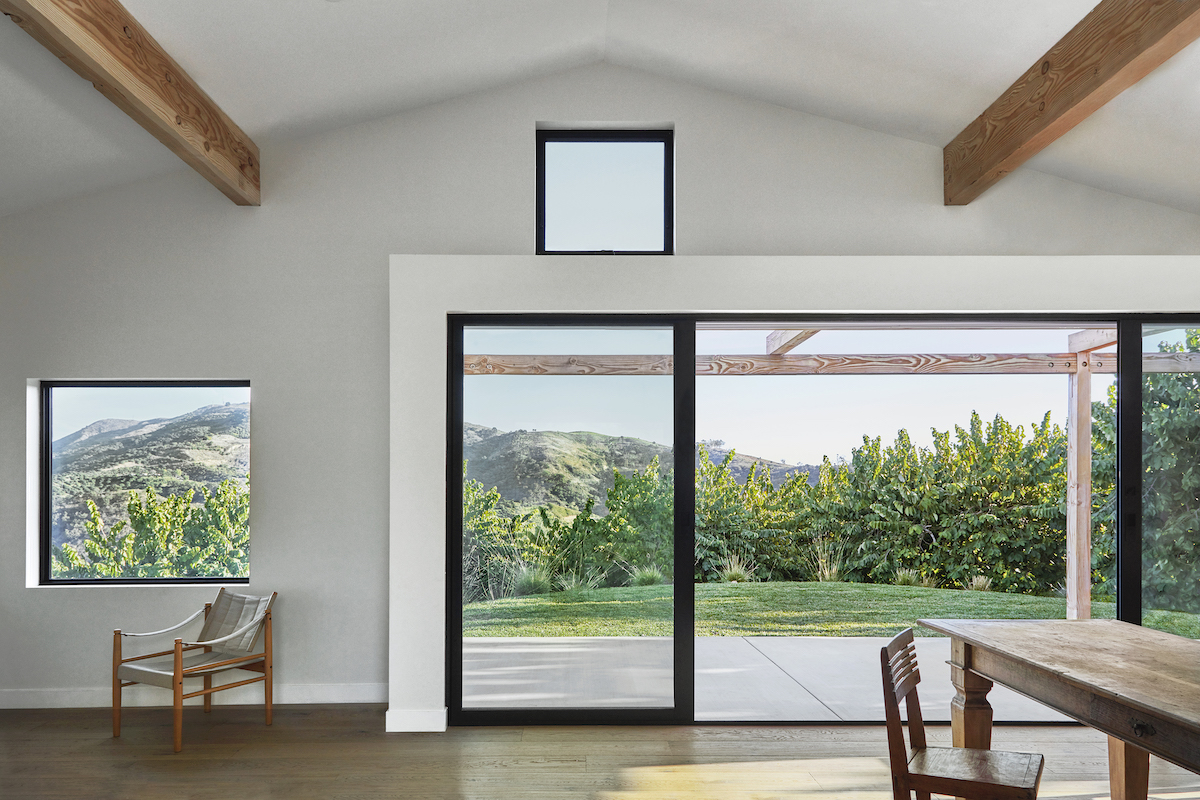 How did the building take form once you’d established the site?

Mora: Siting the house diagonally to the contours of the hill enabled us to create a terraced plan: the house extends down into the orchard and also hugs the natural fall of the land. You get a similar experience when you're moving through the levels of house as you would if you were moving across the hillside.

When you're in the upper part of the house, at the high point of the hillside, you're in the public areas where you capture the canopy of the trees and the long views beyond. As you move down to the more private elements of the building, you're nestled more within the orchard and you have a closer relationship with the cherimoyas; it was really interesting to us that you could create these different little pockets of experience within the site. 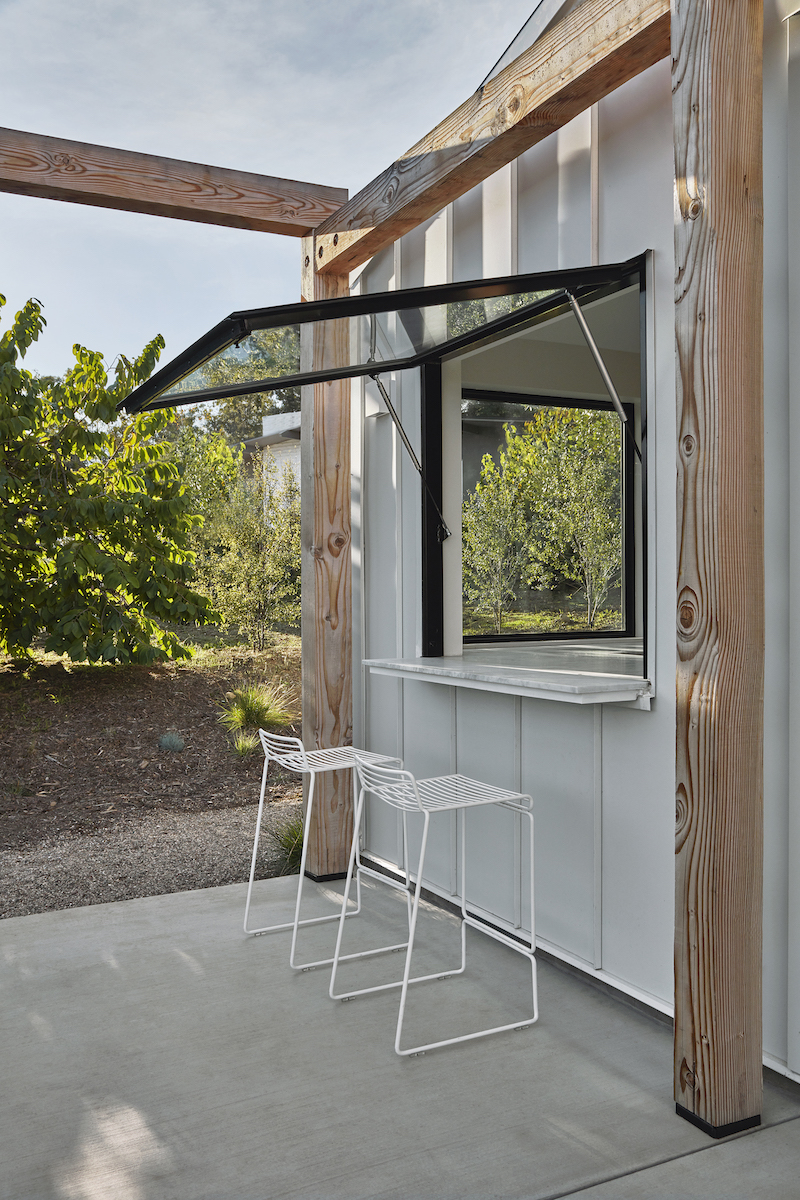 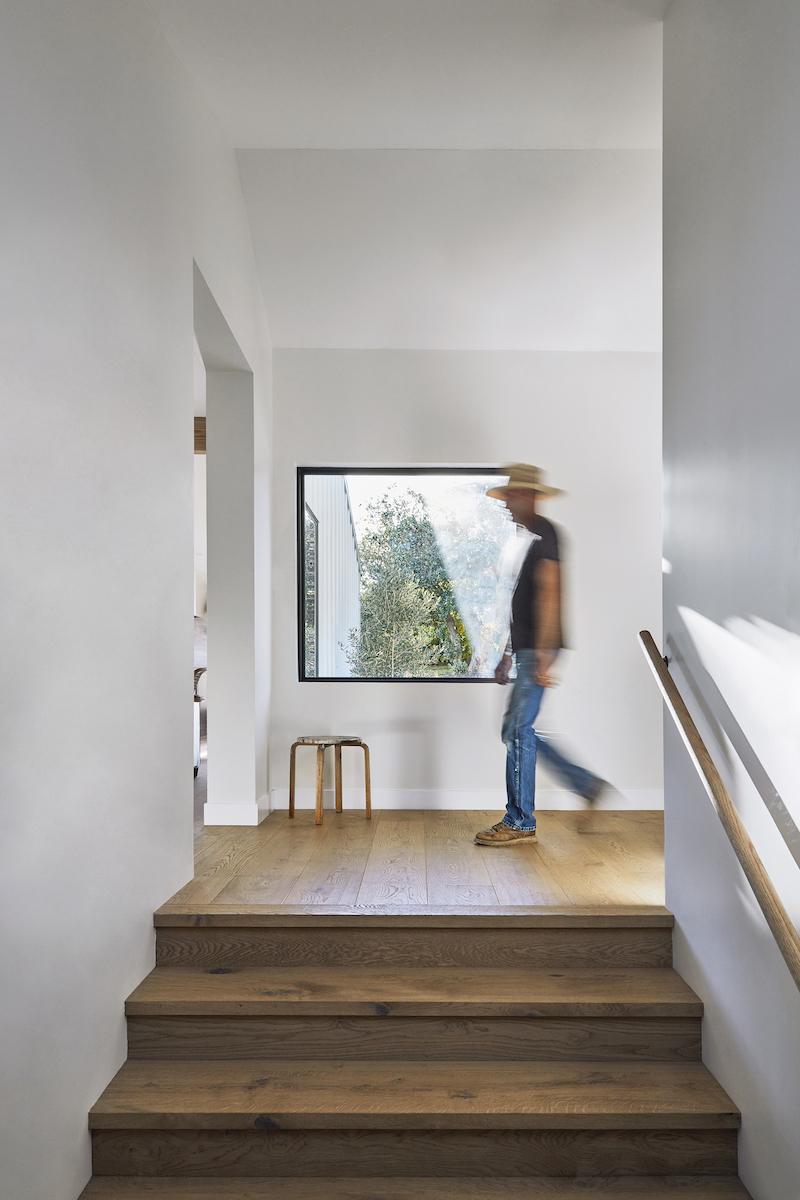 How about the materiality of the house: was the steel a deliberate contrast to the rustic setting?

Sean: The house is in a high fire risk zone so the exterior material palette is more limited and the siding is metal, as well as the roof. We made the choice to use metal at the very beginning of the project and stuck with it all the way through. At the end of 2017, when we were getting permits, the Thomas Fire broke out and burned almost to their property line. We definitely saw that the possibility of fire was very real so we felt justified in having pushed this material choice that isn’t typically residential.

Mora: Also, we'd find ourselves passing by agricultural buildings, greenhouses, and finding ones that we could explore, sneak into, just to experience the qualities of those spaces. And I think that was there in the back of our minds, these simple, agricultural metal sheds that were characteristic of these landscapes and orchards. We wanted to design something that was a bit of a nod to the presence of those structures. 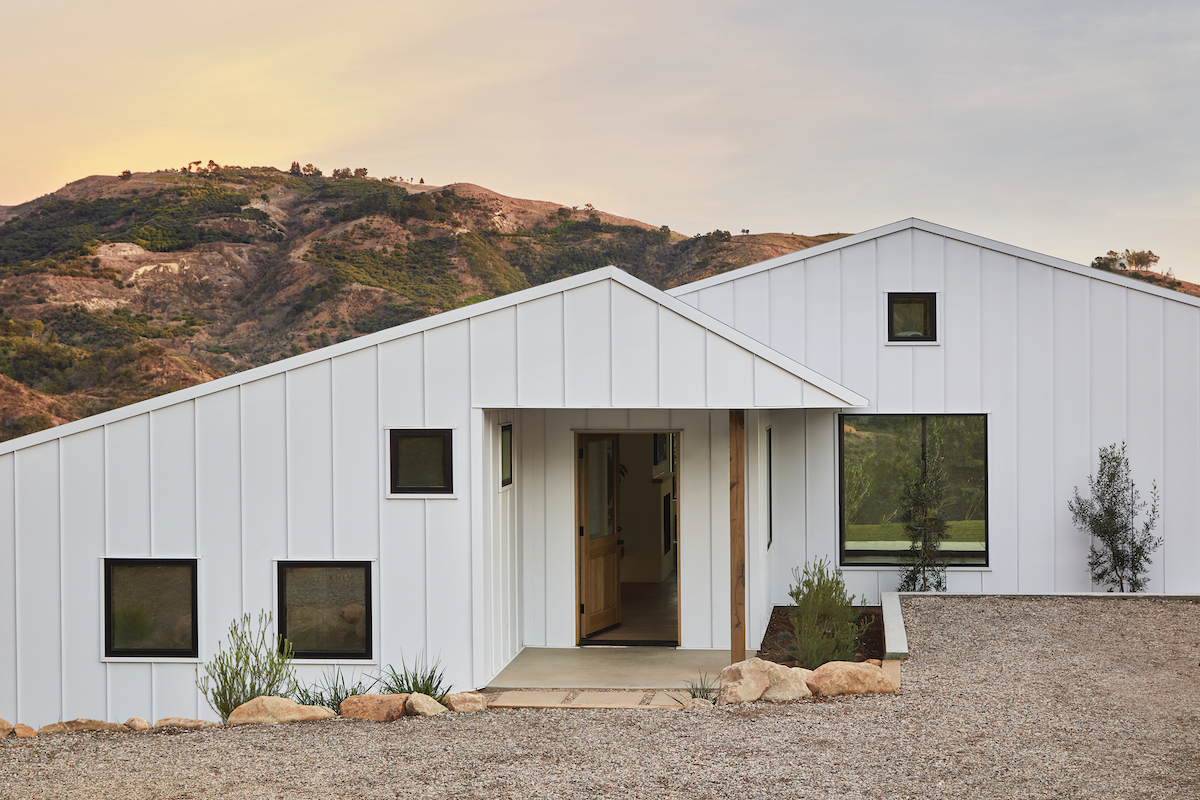 There's something really nice about working with a material like that; the person who did the metal siding was an artist and it was like watching him tailor the siding to the house 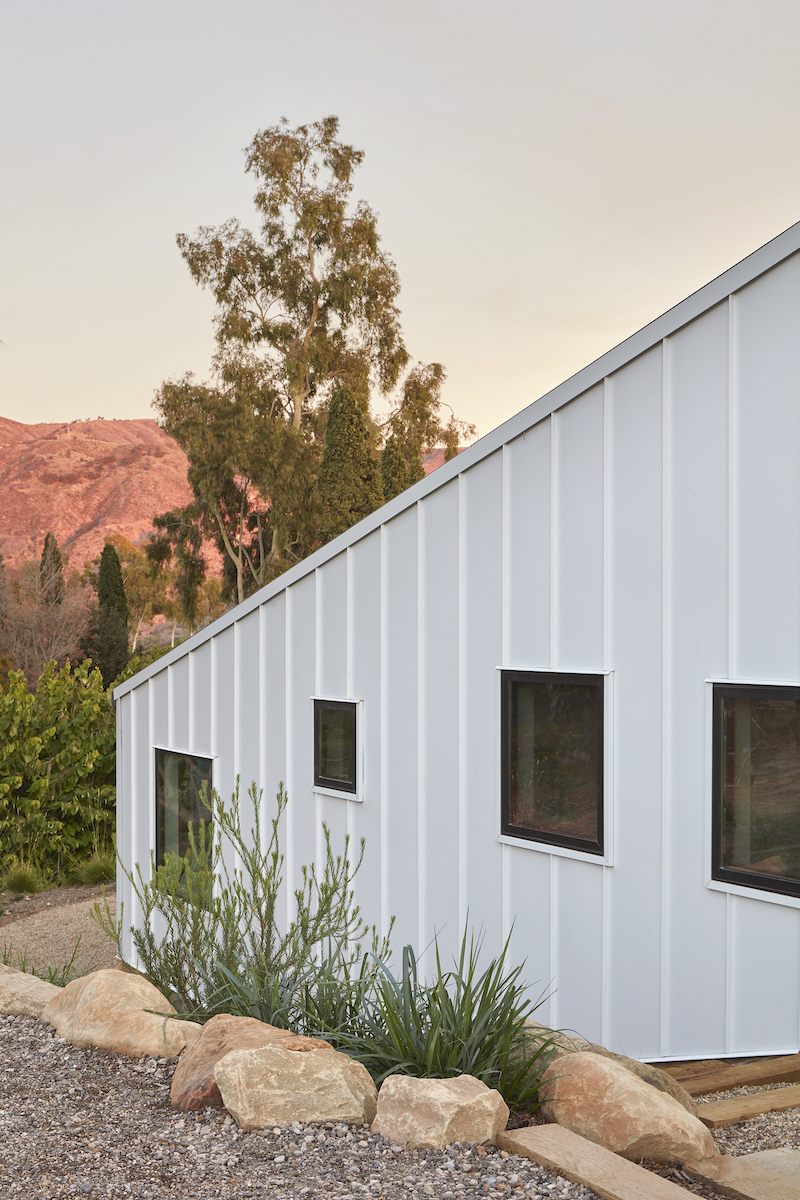 Your clients managed to construct the house on a very tight budget, how did they achieve that?

Mora: It was an essential part of the project that the owners would do whatever they could and that the rest would be subbed out to trades. It influenced the design, because we knew it had to be relatively simple and easy to construct.

Sean: Brian’s a handy guy, but he's not a contractor. So, yeah, we always kept that in mind, along with working with a pretty small budget for a custom house. So some of the simplicity comes from that. As I was saying, it's a small town: we went to high school with the electrician’s kids, the grading contractor went to elementary school with us; Brian’s father, Paul, managed the project while Brian was away during lobster season: in a way it was a community effort.

Mora: The clients were incredibly determined to build this house and to their credit, they did an amazing job, they really pushed what they could do with a tight budget. There was this real sense of community with those who touched the project, which was wonderful.

I think the other thing that's really cool about this project is the clients are friends of Sean's from childhood, and are now friends of mine: this is a house they're going to grow old with and that’s something we're also going to be able to experience along with them. We've been back several times, we were there during the holidays and got to see how they decorated it with Christmas lights; sometimes, as the designer, once the project is finished, your experience with the project gets less and less...

Sean:... Yeah, you have to let it go. But this will continue to be a home that we visit throughout our lives. For us the design of this house was so much about integrating it into the landscape, and we’re looking forward to seeing that landscape continue to establish itself over time. 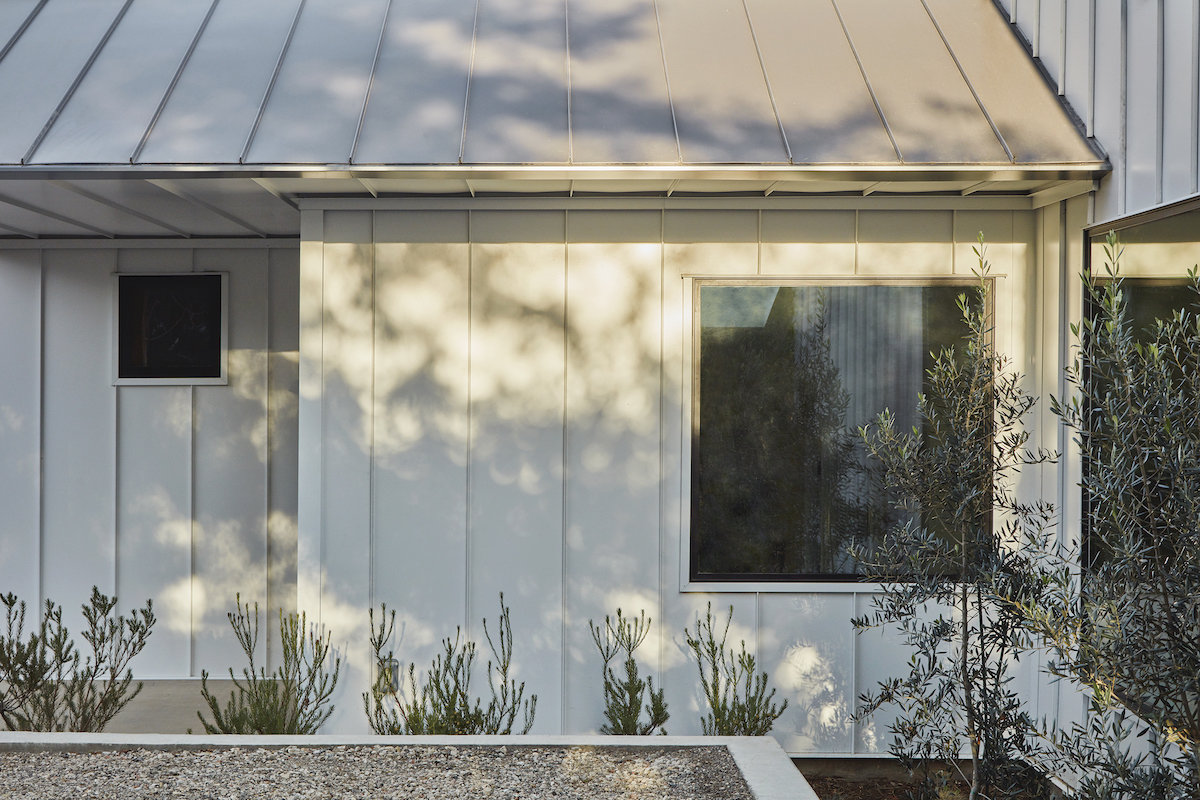 What inspires your practice: California modernism or something else perhaps?

Mora: It's definitely there, but it's not something we think about too much. We see ourselves as continuing along in the tradition of dealing with landscape and the environment very directly.

In terms of this project, part of it was getting to know California a little differently through the experience of going to the site as frequently as we did. We would take Highway 1 from Los Angeles and we would drive along the coast, through the hills and geological formations, the landscape and the agricultural fields of Oxnard.

The experience of doing that drive for three years, getting to know the landscape of California in a regular way through different seasons was inspirational to us. I think we'll carry that sense of the California landscape with us as we continue our work. 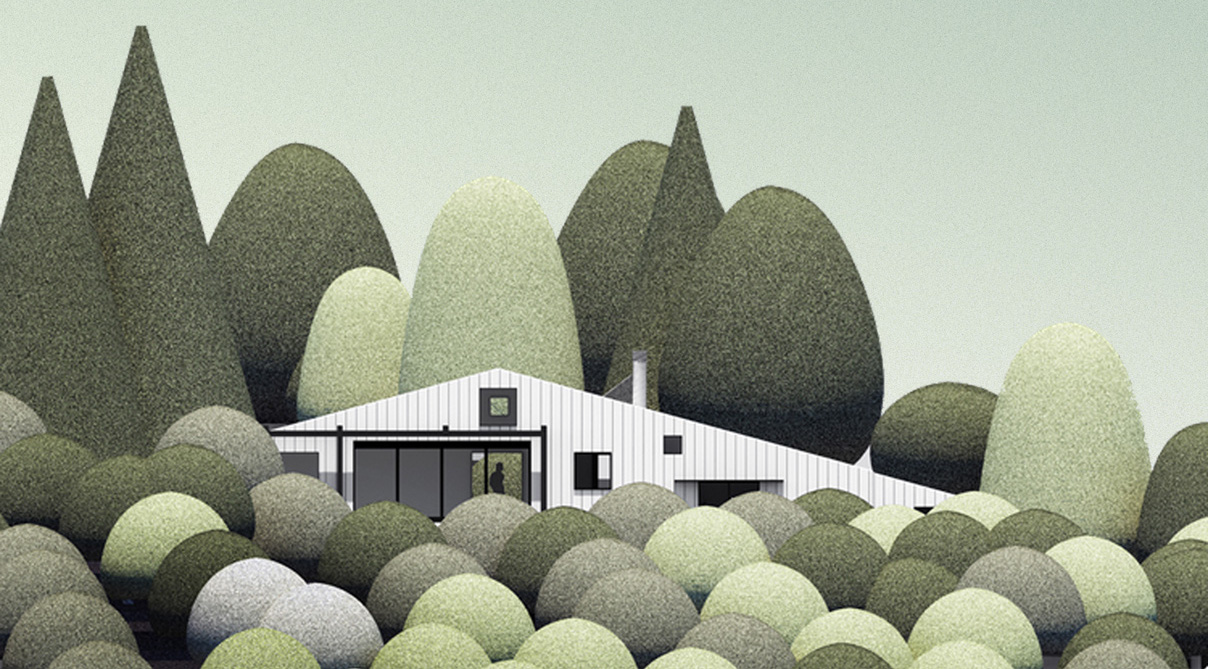